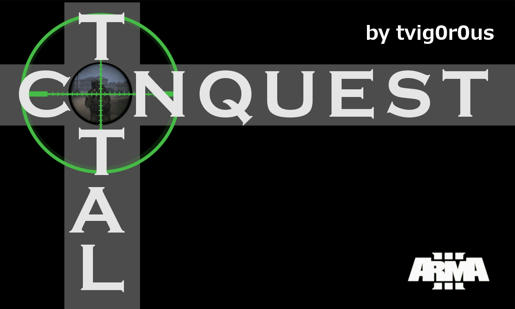 Instability has finally erupted into an all out battle for control where all sides come ready to fight and scorched earth is a viable option. It’s up to you to pull together a team and lead them to the ultimate victory… TOTAL ANNIHILATION OF THE ENEMY! With total freedom, how you approach your mission is entirely up to you. Take control of any vehicle, recruit soldiers or go it alone, there are no rules other than get it done. Total Conquest is a fast paced, action packed engagement where the enemy could be lurking around any corner, so watch your back and stay frosty soldier.

Spawns only occur at control points that are controlled by the corresponding team and contain buildings that report room positions… if a CP is contested, no spawning will occur there until one of the teams takes control of the point. In the event that all of the buildings (possible spawn positions) in a zone are too damaged or destroyed it will be removed from the spawn point pool but will remain a capture point. A winner is decided when a team reaches the set score limit, the time limit is reached (high scoring team wins) or only one team is left with zones on the map. If your team has no control points with valid spawn postitions when you die, you will be automatically switched to the remaining team with the least amount of control points and carry on the battle with that team. This does not necessarily mean your original team is completely out of the game. If there were troops alive from your original team they can still take control of a CP, and if they do, you will be moved back to that team when you respawn.

Total Conquest layouts now cover a much larger area of the map than past Urban Conquest layouts and contain between 30-40 total capture points. Depending on the scope you choose in the parameters, the layout of the mission will be randomly selected from the points in the layout providing for a different layout every time you play. The parameters allow you to tweak the mission enormously and can be tailored to suit any kind of game play. I’ll try to get something together that better explains all of the parameters as well as creating presets to ease the process.

To do list:
– Add some kind of ammo crate system
– Try to get AI groups to use vehicles with cargo slots for transport and deployment in target zones
– Create presets for game modes for easier administration
– More map layouts (including custom maps)