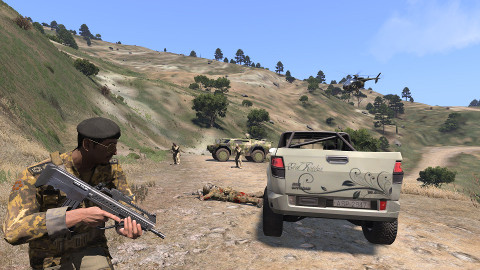 An asymmetric PvP scenario perfect for small to mid sized groups. The players are split into two separate teams:

NATO troops (up to 12 players) armed with light helicopters, vehicles and drones. Their task is to find and neutralise all CSAT operatives deployed onto Stratis. Playing as BLUFOR requires the whole team to cooperate and coordinate their search & chase efforts.

CSAT (up to 4 players) who are lightly armed and dropped on Stratis with the goal of evading detection and collecting intelligence. CSAT players can choose their playstyle, whether they want to stick together, or operate as lone wolves. Game ends once all CSAT players are dead or they extract with required amount of intel.

The gameplay switches between two phases – first a slow paced hunt, in which NATO troops are trying to cover as much ground as possible while CSAT is trying to move quickly, and at the same time avoid detection. Once they are found, however, the game turns into a frantic chase until the operatives have been eliminated, or until they have managed to blend back into the wilderness.

Also, this is a heavily stealth based mission, it is best to disable 3rd person entirely!